The National Child Labor Committee fiercely advocated for the passage  of the Keating-Owen  Act,  which:

In an effort to gain public support for the bill, the NCLC  condemned and reprimanded ineffective state legislation. 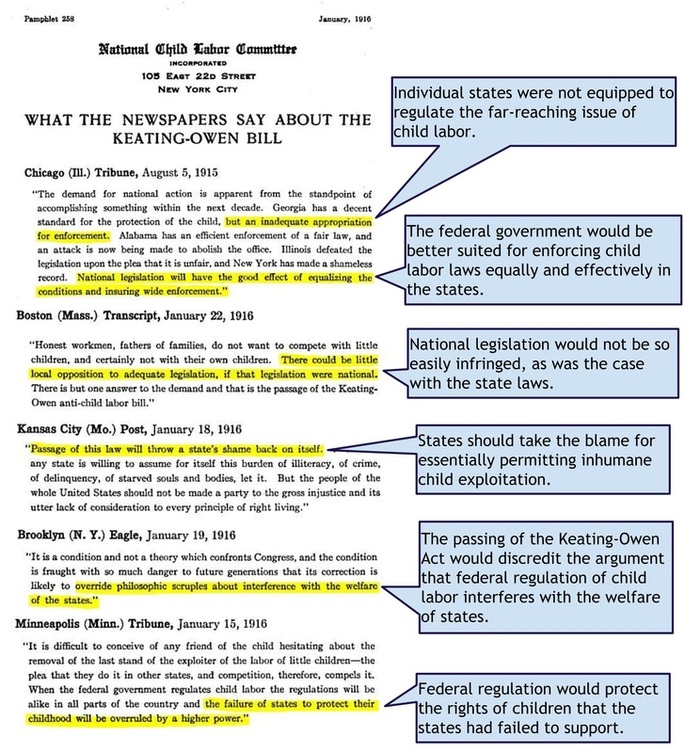 Amendment to the Constitution

"A constitutional amendment was soon proposed to give Congress the power to regulate child labor"
-United States National Archives [n.d.]

The NCLC understood the  potential strength of a  Child Labor Amendment, and supported it profusely.
Ultimately, these  accusations  were  effective  and  the  amendment  did not receive enough votes to ratify it to the Constitution.

However, the National Industrial Recovery Act  did not last long enough to implement its policies.

"In May 1935, in the case of the Schechter Poultry Corp. v. United States, the U.S. Supreme Court invalidated the compulsory-code system on the grounds that the NIRA improperly delegated legislative powers to the executive branch"
-Enrolled Acts and Resolutions of Congress, General Records of the United States Government [2003]

The NCLC and many others  realized that the National Industrial Recovery Act  being declared unconstitutional  meant  a  return  to unregulated and oppressive  child  labor.
These failed  attempts  at  federal  legislation  demonstrated  that  eliminating  child  exploitation depended not only on garnering public sentiment against it,  but  also on the readiness  of  lawmakers  and  advocates for states' rights   to  increase  the power of the federal  government.